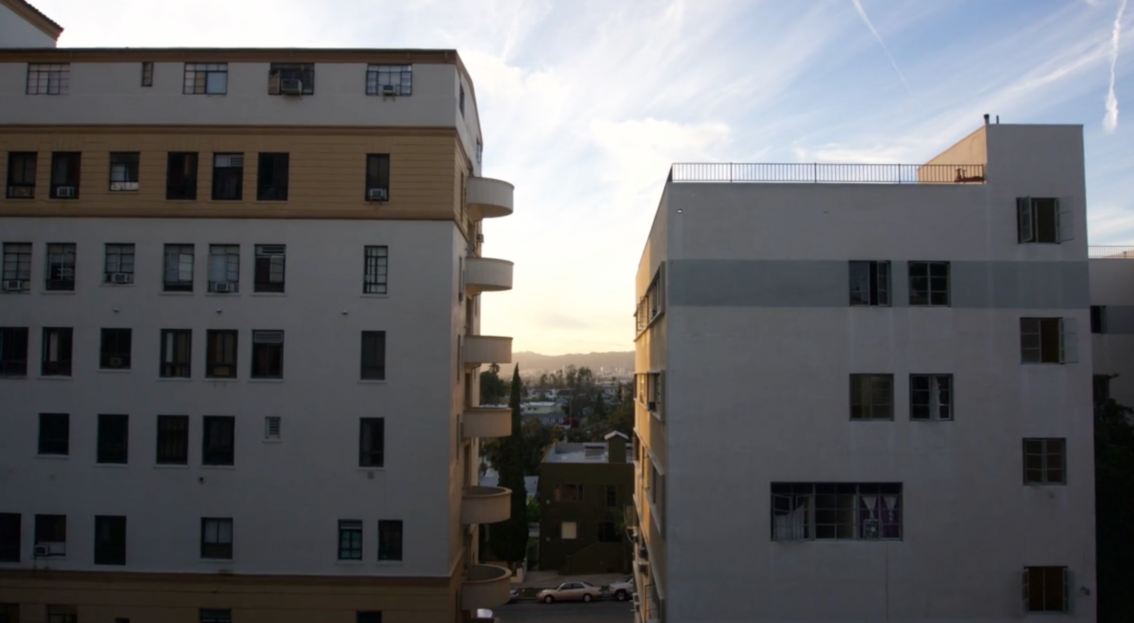 So, while we were in LA, the first night we were there we spread out individually to do evangelism in a place called, Echo Park. And, we split up into teams— my team talked to like a few different people. We were just evangelizing, inviting people to church. First we talked to this elderly Asian guy, he was super out there, he started like yelling the national anthem at us, like singing at the top of his lungs. Then, we started like trying to evangelize to him and talk to him about Jesus, and he wouldn’t look at us at all. He turned his back to us as soon as we started talking to him about Jesus. And so we just started walking away. And he wouldn’t stop talking, so there was only so much we could do. So we walked away, we started talking to this other lady, who had headphones on (she took her headphones off), but before we got two words out she pulled out pepper spray and started pepper spraying at us. So we turned around, Rachael got a little bit in her face, I breathed some in— it was awful. So, um that was like the first two times we evangelized to someone, so we were like, “Wow this is a rough start.”
So we just walked around the rest of the park asking people,
“Hey, do you want prayer?”
“No I don’t want prayer.”
“Hey, do you want to come to church?”
“No, I don’t want to come to church.”
So people were just rejecting it. So, honestly I was getting to the point were I was just like discouraged, and I was like, “Man, you know, what do we do? You know, nobody even wants to hear this. I hate this.” I was just getting down and honestly, I was the only guy in the group, too, so I felt responsible for making sure the girls were protected. Because that’s all on me. So we were walking around and I was feeling discouraged and I saw this guys sitting on a park bench. He looked like he was about to pass out. He was younger, like seventeen-ish. So I went up to him and I was like,
“Hey man, are you okay?”
I felt the Holy Spirit leading me to show concern and just make sure he was okay. And I think that within itself, opened a door to show him the love of Jesus. Because honestly, you can only show compassion to a certain extent, but God’s compassion through you, it just shows and people can recognize it. So I went up to him and was like,
“Hey, are you okay?”
He was like, “Yeah man, I’m just kind of out of it, I’m just falling asleep.”
And I said “Okay just making sure, because you look like you’re about to croak over or something. Are you okay? Is there something wrong?”
He said, “No, I’m just really high.”
So I said, “What are you high on?”
He said, “I just smoked a bunch of weed.”
I said, “I think you’ll be alright.”

I just started talking to him, and asking him how old he was, if he went to school, and then I asked him, “What do you believe?”
He responded saying, “I don’t know what I believe. I haven’t given it much thought.”
And so I started giving him my testimony. I felt the Holy Spirit leading me to do that. And it was kind of cool because the way he acted and his story and all the stuff he was into, was really similar to me when I was his age. And it was just cool to see how God lined up all these parallels between our stories. And so I told him, “Hey man. Here’s my testimony, here is what God has done in my life. To be honest the path that you’re going down, is going to lead to a dead end. And I know that from experience because I have experienced that. I was doing a lot of things that you were doing. And I know it’s hard, but there’s a God up there that cares about YOU. Then, I started to talk to him about Kingdom of Heaven and what that means for me and kind of a thirty-thousand foot view, just really broad, to help him understand the bigger picture of who Jesus was— the why and who.
So basically I just asked him,
“Hey man, is there anything I can pray for you for?”
And he was like “Yeah. I just really want peace.”
It was so interesting because if you would’ve gone back to me before I got saved, one of the things I would’ve wanted you to pray for me for was peace. Because I used to deal with really bad anxiety.
So I started praying for him, and almost as soon as I started praying for him, he starts smiling. And I was like “Is he laughing at me? What is going on?” And then, I felt God speak to me and say, “No, that is a genuine smile.” And then I was done praying for him and I prayed for peace that surpasses all understanding and speaking the truth over him. When I was done, he was like, “I feel better.”
I was like, “Woah, that’s crazy.” This is real. That was the real thing— it’s the power of God, it’s real. That was one of the first times I had seen like, not just a physical transformation, but a heart transformation, while praying for somebody. It’s one thing to pray for physical healing but when you get to pray for somebodies heart, like their inner-man and see that change, that to me was a huge deal. Especially when you can see it on their demeanor.
So I was like, “Okay man, so you feel better?”
And he was like yeah, and he felt something, you could tell.
I asked him, “So would you say, that me coming up to you and talking to you about Jesus and praying for you, and our stories being very similar, would you say that that is a coincidence? Or would you say that that is a divine thing?”
And he was like, “Oh for sure, its not a coincidence.”
I said, “Okay, well, with that being said would you want to give your life to Jesus right now and you would never go back and everything would be different?”
And he said, “Yeah. For sure.”
So I led him to Jesus right there. And he was like a new creation at this point, acting completely different and saying thank you, thank you. You could just tell, something was different. I asked him if he had a bible and it was funny because he said,
“Yeah, um, I have this one leather book, I got it from school, it says something on it, it kind of looks like a bible, it says ‘The Book of Mormon’ on the front. And I was like, “No, no, no!” So I gave him my bible to make sure he had something. Then, I explained to him that Mormonism is a little different that what we believe. And that was it. He was a Christian right there. He walked home and you could tell his life was changed.
It was crazy to see how God just did that so quickly. I think something I learned from that was that sometimes it is okay to just go for salvation right there and change lives. God can do all that so quickly— He can change someones heart in a moment. It was cool to see how powerful God moves and how quickly He moves. And just never underestimate God. Because when I walked up to that guy, I was not expecting him to give his life to Jesus at all. I was expecting it to be another conversation where they shut me down and then I was going to walk away. But it was completely different. He was the opportunity in the midst of the opposition. Just going to that park, just for that one guy would’ve been worth it. Getting pepper sprayed for that one guy, would’ve been worth it. So it was so cool.